Something interesting happened over the past week with our chickens. Interesting enough to post about it! We've had many broody hens (hens that want to sit on eggs and hatch out babies) this spring. I could talk your ear off about it. But let me instead tell you about one particular set.

Raven, a beautiful black Austrolorp hen, went broody 4 1/2 weeks ago. She patiently sat on her eggs for 21 days, though at day 19, I noticed that she often hovered above the eggs. I watched, and to my untrained eyes it looked as though she was feeling the chicks move and was not too happy about it.

Meanwhile, another black Austrolorp hen named Double went broody. We move our broodies from the nest boxes to crates, where they can sit on their eggs in peace without other hens bothering them. But not Double. She was going to stay in the nest box. Anytime we put her in a crate (and we tried many, in many different positions), she went bonkers, screeching and attempting to squeeze out. So day after day she stayed in the nest box instead. She went broody about a week or so before Raven's clutch was due to hatch. I wanted to give Double a few of Raven's eggs, but not up in the nest box where a baby could fall out. 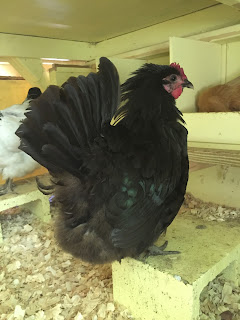 So here I am, looking at a hen who is nervous about activity in the eggs, and a hen who refuses all cages. Raven started taking longer breaks from her eggs. Worried that the eggs would cool, I put Double on them and.... she stayed there. Hm. Weird. She fights all cages except this one.

But I asked a few people for advice, and the overwhelming advice was to put the original hen back on the eggs - the hen that had been broody for only a week (Double) might not take good care of the chicks. So they returned to the original positions. And on day 21, nine gorgeous chicks hatched! 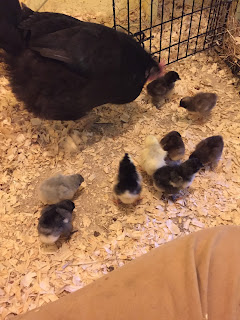 Raven enjoyed them, but things were a bit off. She called her chicks to the food, but then stuffed her own beak. She sat down to cover them, but jumped up every couple of minutes. She wanted to get out, and would leave her chicks until they screamed for her. She did alway come back, but why was she leaving?  It all culminated at one week with a sick chick, standing but swaying, eyes closed, refusing food and water. 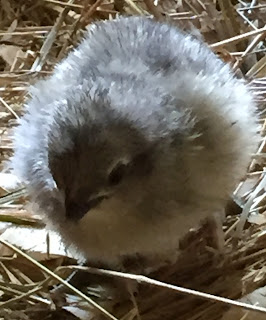 So, what should I do? I sat down in the coop for about 30 minutes, watching and thinking. Then I gave the chick vitamins, said a little prayer (sometimes broody hens will kill strange chicks) and tucked the sick one under Double up in the nest box. She was puzzled, but not aggressive. I put some water and food close and left them alone.

I came back down a hour or so later, and saw something miraculous. Double had the sick chick tucked under her chest, and was chuckling to it. She would dip her beak in water, then bring it down and dribble water on the baby chick's beak. She was taking care of it! Then she sat up a bit, and stroked the chick from head to tail several times, giving it a gentle massage. The chick crawled back under and she settled down on it. She cared for that baby all day. I thought about changing Double's name to Faith - she got her name because we had two chicks that we couldn't tell apart, so we named them Twin and Double.

I thought a bit more, and when the sun went down, I removed Raven from her babies and put Double on them. Double puffed up like a tent and welcomed every baby.  The babies were not very developed - they had been spending energy keeping warm since Raven kept getting up. But Double has put all her effort into caring for these babies, and they've doubled in size over the past 3 days.  She adores them, and they adore her. And the little sick chick is completely recovered. Double clucks to her babies, tends them, invites them in, feeds them. Her tail is a shredded wreck, she has chick poop on her back, and she has lost quite a bit of weight. But she is thrilled. 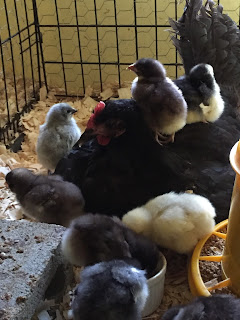 Funny thing is... two months ago Double had a terrible infection in her crop. I had five hens with impactions and sour crops - four cleared up well, but at day four, Double looked terrible. She was hunched over, dull, and her comb turned purple. I came in from treating her (massages 5x/day, syringes of water, yeast infection meds, etc), and broke into tears. As she crawled into her crate, I just knew either she'd be dead in the morning, or I'd take her in and have her put down. She was hurting so much. 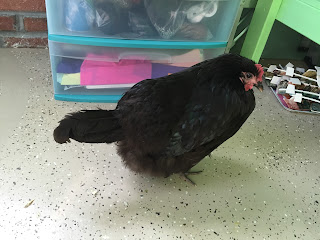 But when I went in the next morning, she still looked bad... but she had a little life in her eyes. So I treated her all day. And that night she was just a little more perky. It took eight days, but my little Double recovered.

And now I realized why I haven't changed her name. She has paid me back. Double. 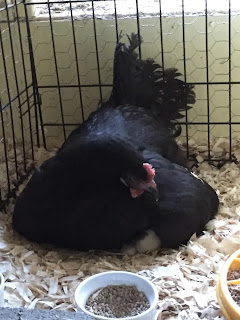