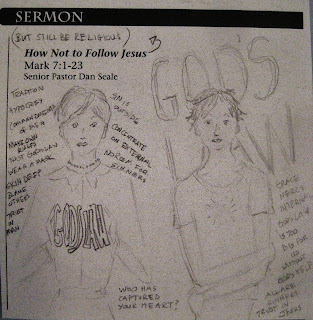 This is what I do during sermons. I used to sit quietly and take notes, but it turns out that words in straight lines do not stick in my head very well. Pictures and crooked words fit my brain more smoothly. This week's sermon was on how not to follow Jesus yet still be religious.
This, I must admit, was a big stumbling block for me when it came to Christ. When you are outside looking into Christianity, everyone seems so hypocritical. And the situation is further confused by the facts that 1) the real invisible church is made up of fallible error-prone humans and 2) not everyone who professes belief in Jesus truly has Christ in their heart. So to me, watching so many people profess a faith in Jesus in word alone, while they lived there life according to worldly values rather than the values of Christ, simply proved that Christ was a figment of their imaginations. If you really believed that Christ was God, well, that should change something in the way you behave, right? Yet so many of the "Christians" in my life behaved as though Sunday was a box to be checked, rules were made to be followed out of fear of punishment, etc etc etc... I was almost 35 years old before I finally had eyes to see a Christian in my life who was not perfect by any means, but who seemed to be trying quite happily to live like one. And when she messed up, she did not harp on herself, get too down on herself. She prayed for guidance and got up and tried to go in the direction that she felt God was leading.

The pictures that I drew this week were very much caricatures, yet they are so true. I see many Christians who do seem to believe, yet have such a hard time giving up control, such a difficult time trying not to squash God into a box of their own making. Though God has captured their hearts, the ways of the world have become such a habit that it takes something special or simply a lot of time to break those habits. And sadly, I see many who think they believe, who believe that they can save themselves by simply admitting the existence of Christ and then "following the rules." But Christ has not changed their hearts through his grace. They live a fearful, twisted existance, trying to force their rules upon others, trying to make sure everyone sees the world through their eyes, as though that will make what they want to believe come true. Their eyes are turned inward, they have become their own god. There is, of course, a very blurred line at that stage - some are not God's children, but try to play the role. And some are God's children, but they are young children indeed. Perhaps not in years, but in spiritual maturity, a youthful struggle that continues year after year.

God's law is bigger than we can imagine. I used to have a button that said "Yield. It's more fun." That was my favorite button, which seems odd, since I was such an independent person. But the saying has stuck with me, becoming ever so true when Christ entered my heart - yielding is truly more fun! But what do we do about those we are unsure of? Go back to the Word. And here are just a very few bits that can be found there about our relationships with others.

Let no corrupting talk come out of your mouths, but only such as is good for building up, as fits the occasion, that it may give grace to those who hear. And do not grieve the Holy Spirit of God, by whom you were sealed for the day of redemption. Let all bitterness and wrath and anger and clamor and slander be put away from you, along with all malice. Be kind to one another, tenderhearted, forgiving one another, as God in Christ forgave you.
Ephesians 4: 29-32

Put on then, as God's chosen ones, holy and beloved, compassionate hearts, kindness, humility, meekness, and patience, bearing with one another and, if one has a complaint against another, forgiving each other; as the Lord has forgiven you, so you also must forgive. And above all these put on love, which binds everything together in perfect harmony.
Colossians 3: 12-14

Love is patient and kind; love does not envy or boast; it is not arrogant or rude. It does not insist on its own way; it is not irritable or resentful; it does not rejoice at wrongdoing, but rejoices with the truth. Love bears all things, believes all things, hopes all things, endures all things. Love never ends.
1 Corinthians 13: 4-8a
Posted by greengrables at 12:58:00 PM