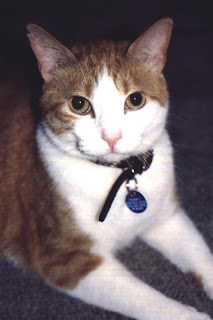 Warning.... this will be sad. I'm writing it for myself, to be quite frank. People have all different ways of coping. My way of coping with a pet's death is by writing and remembering. I've met people who swear they will never have another pet - losing one hurts too much. And other people just don't understand - why get upset? It's only an animal....

Be that as it may, this is how I will mourn for my Perry, my Periwinkle. I remember when I got him in college. I had a cat who was suffering healthwise, and the vet suggested that I get a companion cat. A friend knew of Perry - at that time known as "PJ" - who needed a home. He had been abandoned at a vet clinic. They tried to use him as a transfusion cat, but he had clotting problems. He had also been abused, so he was terrified of men. The vet was going to put him down, but instead, he came to me. He and Sprite hissed at each other for 3 months. Perry spent his days under my bed, creeping out only at night for his litterbox and a little snuggle before slipping back under the bed. After 3 months, I found him sitting in a chair with Sprite - Sprite's paw was on his head and she was grooming him. If he dared to move, she held his head in place with her claws. Sweet Perry - that was how his life went from then on - whatever Sprite wanted, Perry gave her. He adored her.

Perry was a good boy. Sounds trite, but doggone it, it was so true. He hid any time someone came into my apartment, until he met Chris. It was love at first sight with Chris. Until then, no man could touch him. I tried getting any male who entered the apartment to lie on the floor and feed him treats as he hid under the bed (Perry was always a chow hound). But he did not budge in his dislike of people in general and men in particular. But Chris.... immediate bonding. So I married him. No - that wasn't the reason I married Chris ;) But it just shows that Perry was an extremely good judge of character! Even up to his death, Perry spent most of his days sleeping. But when it was time for Chris to come home, Perry's day began. He loved nothing more than to sit at Chris's feet (well, he loved me too, but it was nothing short of miraculous that he adored a MAN so much).

Perry did not get into much trouble - especially compared to the rest of my pets. I do remember him getting stuck in the utility closet once - he freaked out and knocked a few things over... I had to rescue a very bedraggled cat, dripping in Windex. Poor fellow. And another time he leapt out of my car. In a once in a lifetime moment of hand/eye coordination, I reached out, caught him by the tail, and whisked him back into the car. That night I dreamed that he jumped off my balcony and I caught him again. But this time his tail came off (like a skink) and I was left holding his twitching tail. Ew. I always thought his tail looked just like Grover's friend Georgie the worm on Sesame Street. All stripy and cute. And once when I moved, I thought we had lost him - the apartment was empty -no Perry! After a very stressful 30 minutes, we found him - wedged up under the sink on the pipes!

Another memorable moment - Chris came with a ferret. Maggie did not like anyone but Chris (I spent much time leaping around attempting to avoid her wrath.) I was watching her for a bit, so we let her lose in my room, carefully checking under the bed to make sure no other pets were around. I was not aware of the fact that Perry was hiding in a hole in my boxspring. However, Maggie was aware of that fact. She ran in and out ran Perry, Maggie holding his scruff like a rodeo rider. When we tried to get her, Perry assumed the worst and took off. It was a while before things calmed down. (Just fyi, it turned out my other two cats were in there too - as we took Maggie off Perry and tossed him into the hallway, Maggie came out riding the second cat. And again on the third cat.)

One other very funny memory of my boy - one night Chris and I were having a date night. We lit a candle. And let me tell you. Nothing, I mean NOTHING detracts from a romantic moment like realizing that your cat is on fire. He was fine, just minus a lot of tummy hair. Never stand over a candle if you are covered with hair.

Perry was a romantic - Sprite was his love. When she died at age 12 (they were the same age), he mourned fiercely. He paced our hallways, crying out his anguish. So we got another grey female, Paisley. Perry was thrilled, and the yowling stopped. He never snuggled with Paisley, but he was happy for several years. After my surgeries, Paisley disappeared and the howling started again. Eight weeks of howling. We finally broke down and got another cat. We didn't plan it, but Karina was indeed another grey girl. Perry was happy again. He went deaf when he was about 14 - best thing that ever happened to him. He had been skittish, but no longer. Perry would stroll around in the middle of a party, happy as could be with all of the nice quiet people.

Perry loved me.  He had these big liquid eyes that just dripped with adoration.  He was always ready to get and give love (and get food).  When he could hear, I just had to call his name and he'd come running.  After he lost his hearing, I just had to wave at him to get his attention and he'd be by me in a second.  He was never a lap cat.  He just wanted to be near me.  I'd look up while I was writing my thesis and he'd just be sitting there, staring at me and purring.  Always always purring.  I will miss that purr.  I will miss that orange and white fellow with the golden eyes and huge pupils, that love that was always ready to be given.  He came to me in 1991, a frisky but serious young fellow.  He left me last week, a serious intense fellow, still full of vim and vigor.  He kept me company when I lived by myself.  He was there each day and night when Chris and I made our home together.  He sat by me when my baby had colic, when we went through illnesses, when I had surgeries.  I have been through so much of my life, all of my adult life, always with Perry waiting for me when I came home.  Twenty years is a long time.  Half my life.  Tonight I will bury my little friend under a persimmon tree.  And when I go inside, he will not be waiting.
Posted by greengrables at 12:47:00 PM